Have you heard? Hilldrup recently secured the purchase of two Tesla Semi trucks. But our excitement didn’t stop there! With our passion for environmental sustainability and commitment to ensuring our customers’ belongings arrive safely and quickly, we were eager to learn more about our newest purchase.

Hilldrup’s own Jordan McDaniel had the opportunity to visit the Tesla facility in Sunnyvale, CA and the factory in Fremont, CA to gain a greater insight into why the Tesla Semi could be the future of the moving industry.

Jordan visited Tesla’s facilities and its factory along with a few other UniGroup agents. All in attendance had been students in the first and second cohort of the UniGroup Strategic Leadership program; this program brings together emerging leaders from UniGroup agents for a year-long educational program, put on by the leading faculty at the Olin Business School at Washington University (WashU) in St. Louis. Each UniGroup agent who visited California was able to not only see first-hand how the Tesla Semi prototype operates, but also went for a spin in it!

“The Tesla office and factory was much like the Semi prototype itself: simple and modern,” said Jordan. “Being able to see the truck in person and understanding the innovation behind it was incredible – the truck went from ideation to creation of the prototype in nine months! We were all very excited for the full production of the trucks to begin in 2019.”

The UniGroup agents not only visited Tesla, but also had a discussion about the future of the moving industry and the large impact that innovation has in moving UniGroup and each of our agencies forward.

Tesla truly wants to understand the role of a van operator to make the Semi a van operator’s dream based on innovation and safety. In fact, an engineer at Tesla earned their Commercial Driver’s License (CDL) to better understand what van operators experience currently while on the road. By understanding the challenges that van operators experience, Tesla’s engineers are better able to resolve those concerns from both an engineering and driver stand-point. Features that have already been engineered for the Tesla Semi included an additional, necessary storage within the front of the cab and modern safety features like lane-keeping and lane-departure warnings.

Similarly, the need for Tesla’s production line to access the batteries to power the trucks is critical. The batteries are currently manufactured at the Tesla Gigafactory in Sparks, Nevada. The first 100 Tesla Semi trucks will go to Tesla themselves, and Tesla will primarily use them to travel between the Gigafactory and Fremont, CA, which is coincidentally around 300-miles roundtrip – the distance that one semi battery can last. With such a ground-breaking semi-truck being brought to production in such a short amount of time, those first 100 trucks will also be used for performance reviews. Those reviews will assist Hilldrup in considering how many additional Tesla Semi trucks should be purchased in the future.

The trip was a fun, informative and interactive way to learn more about the Tesla Semi for all that it offers to our drivers, future leaders and the moving industry. Thanks for having us, Tesla! 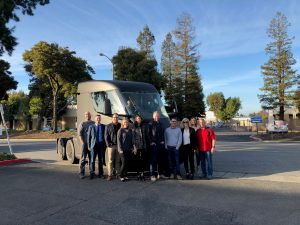 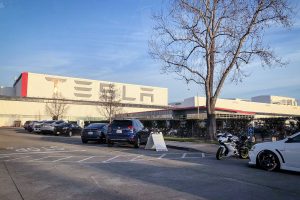 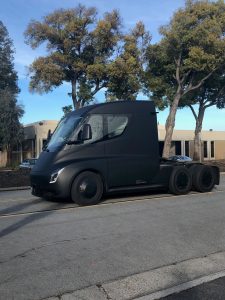 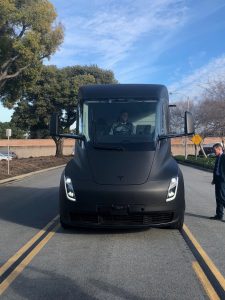 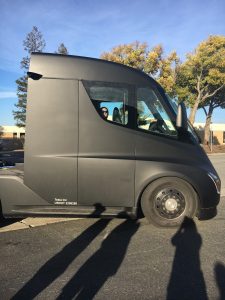 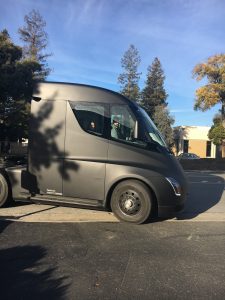 Jordan McDaniel, pictured, rides in the jump-seat of the Tesla Semi.